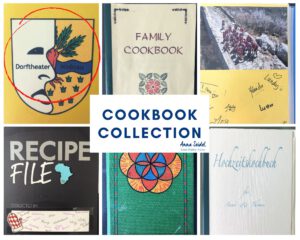 This is the final recipe in a series covering the various cookbooks and recipe collections we have been given over the years. See here for an overview of all the cookbooks. This week I’m sharing the story of my time in Switzerland as a youngish engineer at the turn of the century with you.

One of the greatest culture shocks I ever experienced – because it was so unexpected – was after my move from Germany to Switzerland. With youthful ignorance I assumed Switzerland would be like Germany and was more concerned with housing & logistics and starting my first job off well than with understanding my new host culture.

There are no two ways about it – I loved my work and it gave me enormous satisfaction. More by good fortune and circumstance than by design I lucked out and was part of a team that included a lot of other young engineers from around the world. Together it felt like we were ringing in a new era and shaking up old structures. In hindsight and with the wisdom of an additional 20 years, I wonder what our established colleagues thought of all our youthful exuberance and if HR ever regretted hiring a slew of young expat engineers all at once. But those weren’t my concerns at the time.

By leaving my partner (and future husband) behind to continue his studies in Germany I was free to work crazy hours and spend time socialising with our local expat community. We had great times together, details of which will remain shrouded in mountain mists…

Over time I realized that I had never connected with any Swiss outside of work. I was living in complete isolation from the community I was calling home. Trying to break into a close-knit society in Switzerland turned out to be a lot like doing the same in a small German village. Where do you meet people? By becoming active and invested in the Vereine (community run clubs). So, what interests did I have that I might find represented in small-town Switzerland?

Upon reflection I see now that history was repeating itself. You see, the way we stayed in touch with the US community while growing up off base in our German village was through theater. For years our entire family was regularly involved in performances at the Performing Arts Center on base. This was a way to dip into US-culture at the time and it became my conduit into Swiss culture now.

It most definitely worked. Before long I found myself not only in the midst of rehearsals and set building (while improving my comprehension of Swiss German) but also on bar duty at local festivals, details of which I only vaguely remember but the sense of belonging and fun remains vibrant.

Finding community and connection can be hard and can take time. Sometimes the key is trying something entirely new, sometimes it’s finding people who share an interest. If you’re feeling isolated keep trying. There is always a way and now there is the added bonus of social media to expand our networks and help us find friends online and offline.

When I left Switzerland for South Africa the Dorftheater gave me a recipe collection. I’m sharing a recipe for goulash (German: Gulasch) from Emmi, the group Omi (grandma) who always had an eye out for everyone and was at the heart of the group. In addition to her recipe she also gave me a little tortoise with a note that I still have. In it she says sometimes when life gets tough it’s ok to pull back and hide away for awhile but eventually we always have to come back out and show the world we’re still here. How right you are. Merci, Omi Emmi

There are many variations of goulash. This is an original Swiss recipe. Scale it up for a crowd or enjoy as leftovers. Just be sure to let it cook at least an hour for the flavors to blend. I add red peppers (capsicum) for extra veggies. 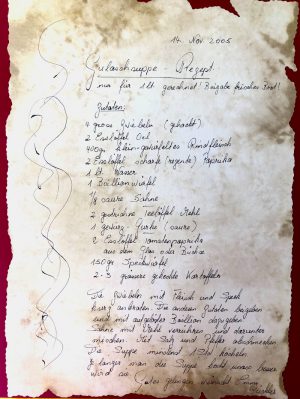 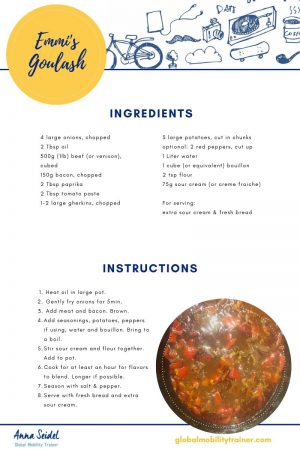